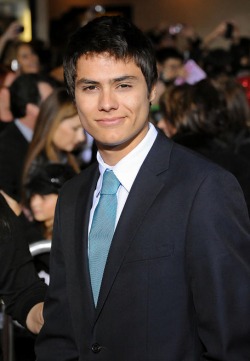 Kiowa Gordon (born 1990) is a Native American actor from Phoenix, Arizona, who will be playing the character Embry Call in the film New Moon and the upcoming Eclipse. In the Twilight film, Embry was portrayed by Krys Hyatt in a short cameo appearance.

Gordon grew up in Arizona, Utah and California and attended Cactus Shadows High School in Cave Creek, Arizona. He is part of the Hualapai Nation which is placed in Northern Arizona, and is a part of the same church as (the Twilight Saga)'s author Stephenie Meyer, the Church of Jesus Christ of Latter Day Saints. He is the second youngest of eight children, and his mother, Camille Nighthorse Gordon is also an actress. Aside from acting Kiowa is also a vocalist.

In 2009, Gordon played werewolf Embry Call in New Moon, based on Stephenie Meyer's novel of the same name. Gordon has said that he was approached one day at church by Stephenie Meyer as she thought he would be perfect for the wolf pack. He then attended an open casting call where he landed the role of Jacob Black's best friend. He has now finished Eclipse, reprising his role as Embry. Kiowa replaced Krys Hyatt (who played Embry in Twilight) in New Moon and Eclipse.
'Twilight Reality is the quality of being true to life within the Twilight Saga' © All Rights Reserved 2008-2011