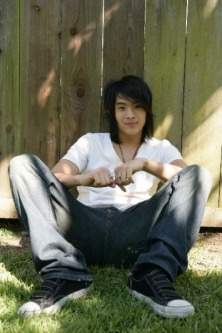 Justin Chon is the actor who portrays Eric Yorkie in the Twilight Saga movies. For the films, the character of Eric was combined with Ben Cheney.

Chon was born in Irvine, California. He is fluent in Korean, and his father was an actor in South Korea. He started acting in 2005 in shows such as Jack & Bobby and Taki & Luci. He came to fame in 2006 when he played Peter Wu in the Disney Channel film Wendy Wu: Homecoming Warrior. He also played Tony Lee in the Nickelodeon sitcom Just Jordan. In 2008, he played Eric Yorkie in the film Twilight, based on the book by Stephenie Meyer. Justin reprised his role as Eric Yorkie in Twilight's sequel, New Moon. Chon also appears in the limited-edition coffee table book "About Face" by celebrity photographer John Russo, published by Pixie Press Worldwide.
'Twilight Reality is the quality of being true to life within the Twilight Saga' © All Rights Reserved 2008-2011