Demetri is a vampire with a tracking ability much more powerful than James', as well as a member of the Volturi Guard. 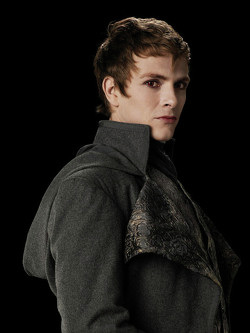 Demetri is a tracker a million times more talented than James and Alistair. This makes him useful in tracking a criminal on the loose.

Physical Appearance
In the books, Demetri is described as having an olive complexion with a chalky pallor, and black hair that reaches his shoulders. He is described as tall and lean. Bella also described Demetri in Breaking Dawn as being hard and lean as the blade of a sword remembering what he looked like the last time she met him in New Moon.

He is portrayed by Charlie Bewley in the film New Moon, he has short, frosted brown hair.

Personality
Not very talkative, he is perceived as being reasonable, very polite, even formal. He is very elegant and charming. It appears that he and Felix share a close friendship. Demetri is also very loyal to the Volturi and enjoys working under them.
Charlie Bewley states that Demetri is the "Casanova of Life" indicating that he is popular with the females. 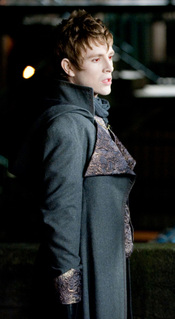 Demetri's special ability is sensory location, which appears to be a common power as James and Alistair also possess it. He catches the "tenor" of a person's thoughts, and uses it to follow his targets until he finds them. It is believed that he would not be able to track Bella, since she is protected from mental abilities. However, it is still said in New Moon that his powers are far more powerful than James', because he can track people from all across the world, while James needed to be relatively close to the victim. He is considered the greatest tracker in the world, and that is why Aro recruited him, because he did not surround himself with second-bests.

New Moon
Demetri makes his first appearance in New Moon, coming to bring Edward (and kill him if necessary) and Bella to Aro with Felix and Jane. During their confrontation with the Volturi leaders, Demetri is left on the sidelines to observe their conversation.

After Aro dismisses them, Demetri escorts them to the exit.

In the movie of New Moon, Alice tries to help Edward fight Felix, but Demetri restrains her. 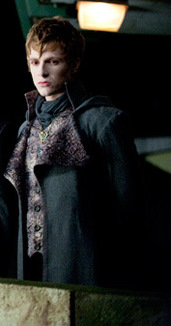 While making no official physical appearance in Eclipse, he is assumed to be with the guard sent to Forks to dispose of Victoria's army.

In the movie adaptation, Demetri is only seen in two scenes. One is in Seattle, where he, Alec, Jane and Felix observe Victoria's vampire army, and, if necessary, dispose of them. In the second scene, he shows up near the end of the movie, to question the Cullens after they destroyed the vampire army and observe the execution of Bree. 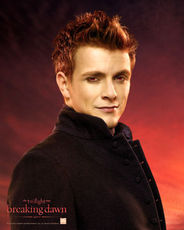 When Irina reports to the Volturi for the Cullens' creation of an immortal child, they prepare to make a move to execute them.

Demetri becomes an immense threat towards the Cullens' survival, as he could trace all of them (except Bella) if they managed to escape during the confrontation with the Volturi over Renesmee Cullen. Because of this, he becomes the main target for Edward and Bella should a fight become inevitable. This ends peacefully, however, and everyone retreats in peace, with the only vampire, Irina, executed for false report in the process.

Etymology
Demetri may have descended from the name "Demetrius" which is Greek for "devotee of Demeter".
'Twilight Reality is the quality of being true to life within the Twilight Saga' © All Rights Reserved 2008-2011