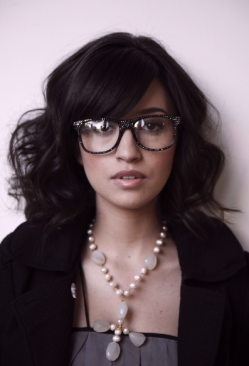 Christian Marie Serratos-Bernardi is the actress who portrays Angela Weber in the Twilight series. She is best known for a recurring role on Ned's Declassified School Survival Guide as the character Suzie Crabgrass. She is seen in "Save the Seal" commercials.

Born September 21, 1990 in Pasadena, California, United States. She is of Mexican, Italian and Irish descent. Serratos started figure skating when she was three years old and continued to skate completitively for 10 years. She is a vegetarian.

Twilight
Serratos had read the novels and was excited to audition for the movie. She originally read for the part of Jessica. After a few auditions she was asked to read for the part of Angela Weber. She says "reading the books, I fell totally in love with Angela. So when they said I was going to have the opportunity to audition for Angela, I really took advantage." She took her glasses off to audition for Jessica, but put them back on to become Angela. Her two favorite scenes to shoot were the car crash, which was the first scene shot with all of the "humans", and the beach scene.
'Twilight Reality is the quality of being true to life within the Twilight Saga' © All Rights Reserved 2008-2011