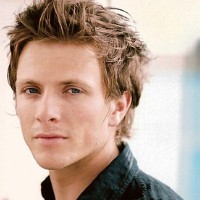 Charlie Bewley was born on January 25, 1981 in London. Charlie is an English actor who grew up with 3 younger siblings. He played the character Demetri in the 2009 film New Moon, which is the second adaptation of Stephenie Meyer's Twilight saga. He reprises his role as Demetri in Eclipse. He will also appear in the upcoming movies Ecstasy and Soldiers of Fortune.

Bewley was raised on a farm house in the middle of England. He was born the eldest of four children and was educated at Loughborough Grammar School and Oakham School. His younger brother, Andrew Clare Bewley is currently in his final year at the school. Bewley also has one sister, and another brother.Charlie Bewley was brought up in what he calls a “wonderfully dysfunctional family detached from the norm.” He learned to use his life experiences to help further his ambitions and here he is now, landing a role in the Saga that is capturing millions across the globe. He wishes to work on some scripts and production in the future with his career as well as continuing his pursuit of his acting. Charlie seems to always carry with him a living humor than illuminates anything he is doing.
'Twilight Reality is the quality of being true to life within the Twilight Saga' © All Rights Reserved 2008-2011