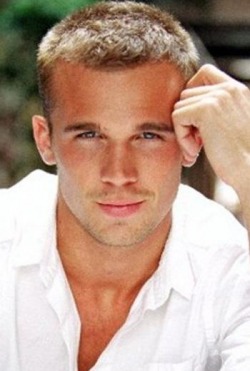 Cameron "Cam" Joslin Gigandet (pronounced /dʒiːɡɑːnˈdeɪ/; born August 16, 1982) is an American actor, perhaps best known for portraying the character of Kevin Volchok on the FOX television series The O.C., and Ryan McCarthy in the film Never Back Down. In 2008, Gigandet starred as James int he film adaptation of Stephenie Meyer's novel, Twilight.

Gigandet was born in Tacoma, Washington to Jay and Kim Gigandet, along with one sister named Kelsie. After graduating from Auburn Senior High School in Auburn, Washington in 2001, he moved to California where he attended Santa Monica Community College, where he first took an acting class.

Career
In 2003, Gigandet won his first role and made his TV debut with his portrayal of Mark Young on the fourth season of CSI: Crime Scene Investigation. His other television credits include The Young and the Restless, Jack & Bobby and The O.C., where he played Kevin Volchok.

He also starred in the film Mistaken in 2004, Who's Your Caddy? in 2007, and Never Back Down in 2008. That same year, he also played James in Twilight. Gigandet has a number of newer film roles, including The Unborn and Making Change.

In 2008, Gigandet was honored with several awards, including the "One to Watch" award received at the 10th Annual Young Hollywood Awards. He also shares an MTV Movie Award with co-star Sean Faris for "Best Fight" from the movie Never Back Down. His latest accomplishment is the "Rising Male Star of the Year" award, given to him by Home Entertainment. In 2009 he won his second MTV Movie Award for "Best Fight" from Twilight, which he shares with Robert Pattinson.

Gigandet stars alongside Christina Aguilera and Cher in Aguilera's film debut Burlesque (2010).
'Twilight Reality is the quality of being true to life within the Twilight Saga' © All Rights Reserved 2008-2011