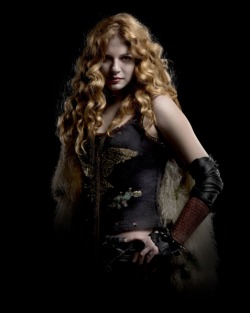 Victoria was a nomadic vampire who was a member of James' Coven. She was the mate of James and began a vendetta against Bella Swan in revenge for his death by Edward and the Cullens she called it a Mate for a Mate. To this end, she spearheaded several plots to end Bella's life, including creating a newborn army in Seattle, with the express purpose of killing her and destroying the Olympic Coven. However, at the conclusion of the newborn crisis in Seattle, Victoria's life of violence and malice was ended by Edward Cullen in the battle with the newborn army.

Physical Description
Victoria was described as feline or cat-like with long, curly red orange hair that was usually described as looking like fire. She possessed a terrible beauty and had a soft, high soprano of a voice that contrasted with her fierce looks. She moves at a quick pace with perfect, lethal steps, as of her agility. When Bella heard Victoria speak for the first time in Eclipse, she described her voice as 'belonging to blond curls and pink bubblegum'. 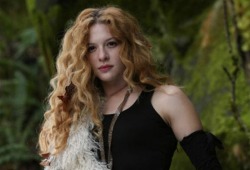 Personality and Traits
Victoria is shown to have a mysterious but elegant personality. She could best be described as calculating however she was frequently bloodthirsty, whether it was when she was dying to kill Bella for her delicious blood on the baseball field in Twilight or when she was stalking Bella for revenge in New Moon and/or Eclipse. She is also marked as one of the most persistent and ruthless characters in the series. Like most archetypal vampires and femme fatales, she is seductively charming and rather vain. As seen in Eclipse, Victoria is shown to be very manipulate and is willing to use others in order to achieve her own goals. Victoria lied to Riley in order to get revenge on Bella Swan and she felt that Riley was nothing more than a pawn to her. 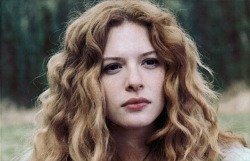 Powers and Abilities
Victoria, like all vampires, possessed inhuman beauty, strength, incredible speed, agility, and endurance. Clearly Victoria was also a very capable fighter, "lethal" as Bella describes it. Because even Edward, who could read her mind and was an equal fighter to Jasper, couldn't finish her immediately; they danced for a thrilling while, woven within a deadly blur. But it is assumed that it was Victoria's special ability, self-preservation, she's fighter skillful, that made her a skilled combatant. Because, as is described by Stephenie Meyer, "her feet were dragged to safe spots and places". Many think she was skilled within fighting, but mostly relied on her gift.

It is unknown who turned Victoria, but sometime after she became a vampire, Victoria became the mate of the tracker James and was a member of his coven, along with Laurent.

Twilight
After coming across the Olympic Coven in Twilight, Victoria assisted James, her lover and coven leader, in tracking Bella. When he tricked Bella to going to Phoenix, Edward saved Bella and killed James. Since then, Victoria declared revenge on Edward, and as such, secretly began to plan to kill Bella. Since Edward killed James, she thought it would be fair if it was mate for mate.

In the Twilight movie, she, James and Laurent feast on the people in Washington State, including one of Charlie Swan's close friends, Waylon Forge. She is also seen dressed in a prom dress with make-up on, spying on Bella and Edward as they dance to prom music at the end of the movie. 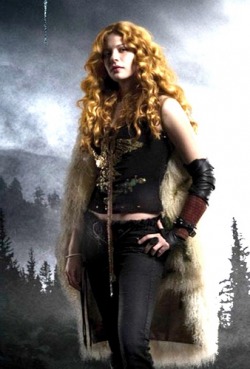 New Moon
Victoria returned to Forks in New Moon in the hopes of killing Bella to get back at Edward for killing James. She even sent Laurent to check if she was still under the Cullens' protection. However, she failed to attack Bella due to the vigilant protection of Jacob and other Quileute wolves. Bella saw what she thought was fire on the water after she went cliff diving, but it was actually the flowing red-orange hair of Victoria, who was forced to retreat into the ocean by the pursuing Jacob and the other Quileute wolves.

Eclipse
In Eclipse, Victoria made an army of newborn vampires in Seattle, where she killed over 30 people of all ages, races, and sizes to build her army while evading Alice's vision by hiding in the shadows and let someone else select a member for her. She sent Riley to get a red blouse of Bella's to give her scent to the other newborns and get them into action.

Bella managed to figure out her plan and gave Alice a connection to the army and Victoria. Eventually, while her army was fighting with the Cullens and wolves, she and Riley came across Edward, Bella and Seth. She then fought Edward while Riley battled Seth. Seth killed Riley, and Victoria tried to escape, but Edward caught her and killed her. Victoria and Riley's remains were then burned, and her newborn army was defeated by the other Cullens and Quileutes. 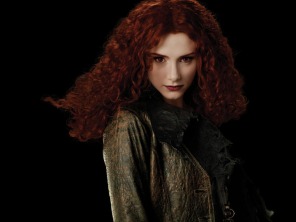 In the Eclipse novella, The Short Second Life of Bree Tanner, it is revealed that she started her army almost one year ago. She inflicted the army with the myths of vampire weaknesses in order to control them. One of the members, Diego, figured out the truth, but she killed him to prevent the rest from finding out. The  Volturi came to Victoria and Riley one night and gave her a five-day limit to fulfill her army's purpose, which explains the reason behind the day they decided to attack the Cullens.

Self - Preservation
Victoria's special ability was self-preservation, which is how she managed to escape being killed by the Quileute wolves in New Moon. How this ability carried over from her human life is unknown. Edward identified her ability as self-preservation, which was the instinctive need to do what is necessary to stay alive. This ability works by instinctively knowing how to evade an enemy's attack and where to run in order to survive. In Eclipse, Victoria resisted her survival instincts in order to kill Bella, but that brought her to her death when Edward ripped her body apart and burnt the pieces.

Since vampires bring out their strongest sides during their transformation, it can be easily implied that Victoria may had had a strong survival desire and instinct as a human. 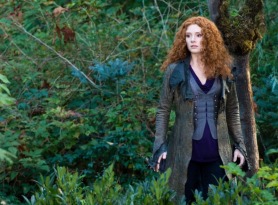 James
Victoria was in love with James when they met the Cullens. She searched for Bella  in the South, trying her best to help James' hunt in any way. When she learned of James' death, she spent months plotting her slow torture and murder of Bella. When Victoria made her last try to kill Bella, Edward taunted her by saying James only kept her around because of her ability to escape. Whether this is true or not is unknown.


Laurent
Laurent was an original member of James's Coven, but when  Jamesand Victoria went to hunt down Bella, he told the Cullens that he was sick of James' games. After, he went and lived with the Denali Coven and soon Irina became his mate.

As Laurent was passing through Forks in New Moon, he found Bella in Edward's meadow and was about to kill her but was destroyed by Jacob Black and four other werewolves. 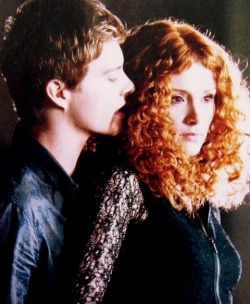 Riley
Riley was a newborn who Victoria told she loved. In truth, she didn't really have any feelings for him, she was still in love with her dead mate, James. Victoria's only reason to lie to him was so he would obey her without questioning. Even though Riley had been suspicious of her true feelings for him, he remained loyal till the end, and that led him to his death. Before he died, he painfully called out to Victoria, but she ignored him completely.

Bella Swan
After Bella's mate, Edward, destroyed Victoria's mate, James, Victoria set out to take revenge by killing Bella in order to return the favor. This becomes a major plot line in both New Moon and Eclipse.

In order to succeed, she studied the Cullens' powers and prepared an army of newborn vampires to get past them.

Film Portrayal
To prepare for her role of Victoria in the Twilight film, Rachelle Lefevre watched lion attacks on Youtube and acted like a cat for a day to get used to acting feline. During her audition, she jumped on a chair and hissed at director Catherine Hardwicke, assuring her of her scary cat abilities. She also wrote a letter to Hardwicke about how she bonded and had a relation to Victoria. As in the novel, Victoria was portrayed as fierce and beautiful, but while in the book she didn't speak, in the movie she had a few lines and at the end during Bella's prom she appeared to be planning a way to get revenge for her mate, James. Lefevre reprised her role as Victoria in New Moon, but was replaced with Bryce Dallas Howard in Eclipse. In the films, Victoria was given the last name "Sutherland".

Etymology
Victoria means 'victory' in Latin. This could be because she claimed victory against the Cullens and the Quilute pack by eluding them several times.
'Twilight Reality is the quality of being true to life within the Twilight Saga' © All Rights Reserved 2008-2011