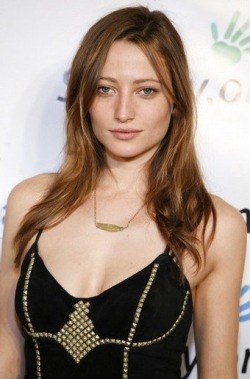 Noot Seear is a Canadian supermodel plays the character Heidi in the New Moon movie.

Seear was born on October 5th, 1983 in Vancouver, Canada of Dutch descent. She has appeared in advertising campaigns for brands such as Chanel, Giorgio Armani, Kenzo, Pantene Pro-V, Ralph Lauren Polo Jeans, Kenneth Cole, Neiman Marcus, Alberta Ferretti, Rolex and Yves Saint Laurent, where she was memorably styled as the Mona Lisa by Leonardo da Vinci for the Rive Gauche ad campaign in 1998. Notably, she has been the face of two frangrances: Calvin Klein ck one and Vera Wang by Vera Wang. Seear has graced the cover of Elle Germany, Amica (Italty), D (Italty) and Vogue Nippon and has been photographed by Patrick Demarchelier, Mario Sorrenti and Paolo Roversi. She was discovered in a shopping mall by a scout from the Look agency in Vancouver when she was 14 years old. She then began modelling in her home town in 1996. In 1997, she moved to New York City in order to further her career and gain more exposure. Seear's catwalk debut came in September of 1998 at New York Fashion Week, where she walked for Calvin Klein, Daryl K and Ralph Lauren. During her career, she has walked the runway for designers such as Balenciaga, Lanvin, Karl Lagerfeld, Alexander Wang, Proenza Schouler, Ralph Lauren, Diane von Furstenberg, Givenchy, Chanel and Alexander McQueen. Seear has also pursued a career as an actress, and played the role of Heidi in the sequel to the movie Twilight, New Moon. In her free time, Seear enjoys riding horses and snowboarding. She has a tattoo on her left arm.