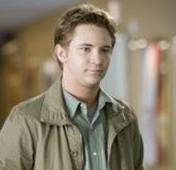 Michael "Mike" Newton, born in 1988, is one of the students who attends Bella Swan's high school, Forks High School.

Mike is described as having pale blue eyes, blond hair, a baby face, and being altogether good looking. Mike is very popular in Forks High School, and showed persistence in trying to capture Bella's affections. Bella described him as a golden retriever; loyal, and obsessed with following random people. Edward really hates Mike because of his love for Bella and the nasty and rude thoughts he has about her. In later books, his face matures slightly, and wears his hair gelled, in attempts to mimic Edward's look.  Jacob Black referred to him as a "marshmallow" after he vomited from watching a horror film with Bella Swan and Jacob.

Mike was portrayed by actor Michael Welch in Twilight and New Moon movies.

Twilight
Mike first meets Bella on her first day of school in Twilight,  and takes an immediate romantic liking towards her. He continues to seek her affections even after Bella and Edward Cullen are together. Bella once tries to imagine him with a wagging tail, since he followed her around a lot. At Bella's urging, Mike goes out with Jessica Stanley, a fellow student, but their relationship does not last. Edward and Mike are always at odds because they both seek Bella's attention.

New Moon
In New Moon, Bella states in Chapter 1 that Mike seemed to have gotten over sulking and has finally accepted that they can only ever be friends. When Bella goes into her '
zombie period', Mike asks her every Friday if she will go to work the next day, and stops bothering to walk her to classes anymore. Bella tries to rekindle their friendship after four months of 'being a zombie' after the Cullens leave Forks. Mike becomes her friend again, although not with the same enthusiasm and also never forgets his fondness of Bella. In New Moon, after a movie outing (Crosshairs) with Bella and Jacob, Mike seems to have given up on Bella, and tells her that, "girls are cruel". However, Mike is one of those who willingly accepts Bella back after her depression.

Romantic Relationships
Bella Swan:
Mike was infatuated with Bella as soon as she started going to Forks High School. He seems to only like Bella because of her popularity and good looks. Bella does not reciprocate his feelings. Mike asked Bella to the spring dance, but she turned him down just like she did every other person who asked her. Edward showed a dislike for Mike over his possessive and lecherous thoughts of Bella. Mike later became very jealous when he realized that Bella was in love with Edward, who he considered a freak.
It would seem that Mike never completely got over his feelings for Bella. Edward commented that Mike was having improper thoughts about Bella while attending their wedding in Breaking Dawn.

Jessica Stanley:
Mike only went out with Jessica at Bella's urging, because Bella knew that Jessica had a crush on Mike. Their relationship did not last very long, and they broke up that same summer.However, Bella noted that at her wedding, Mike and Jessica were holding hands. She was surprised and pleased to discover they were back together.
'Twilight Reality is the quality of being true to life within the Twilight Saga' © All Rights Reserved 2008-2011