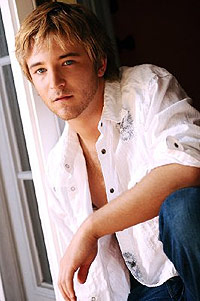 Michael Alan Welch (born July 25, 1987) is an American actor. He is perhaps best known for his roles as Luke Girardi on the TV series Joan of Arcadia, and as Mike Newton in the films Twilight and New Moon.
Welch was born in Los Angeles, California, and began his acting career at the age of 10. Welch is close friends with his Joan of Arcadia co-star Aaron Himelstein, who played the recurring character Friedman on the series. He and Himelstein had known each other for several years but did not become good friends until the series began in 2003.

Welch appeared in the 1998 film Star Trek: Insurrection, as well as on the television series Malcolm in the Middle, The X-Files, 7th Heaven, Cold Case, Without a Trace, NCIS, Crossing Jordan, The Riches, and Birds of Prey. He also narrated the Carl Hiaasen book, Flush, for CD in 2006. One of his most acclaimed roles is as a teenage version of Colonel Jack O'Neill (Young Jack O'Neill) in the Stargate SG-1 episode "Fragile Balance". In 2008, Welch played Mike Newton in the film Twilight, based on the book by Stephenie Meyer. He reprized the role in the film's 2009 sequel, New Moon, and will return in Eclipse. He also stars in the indie thriller Unrequited under the direction from Jason Epperson.

Welch is featured in the online viral campaign "Aczone: The Musical", which was created to inform teenagers about a new acne treatment.
'Twilight Reality is the quality of being true to life within the Twilight Saga' © All Rights Reserved 2008-2011