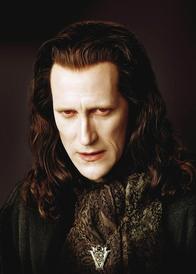 Marcus is one of three vampires in Italy who live what Edward described as a very civilized and educated lifestyle. Carlisle found them while on his own search for the truth behind his nature. The Italian vampires tried to cure Carlisle of “his aversion to his natural food source,” but they failed. Their likeness was depicted in several painting by Solimena.

As a result of losing his mate, Didyme, Marcus eventually became extremely apathetic. He voted against destroying Renesmee in an 'almost bored fashion', not even looking at the Cullens and their allies while doing so. The others of the Volturi seem to recognize this aspect of himself, as none of the Volturi reacted at all to his vote.

Marcus lost his mate, Didyme, when Aro, her brother, killed her. He never knew Aro killed her. That loss, over the centuries, turned him into the apathetic zombie he is today.

Marcus' personality is unknown prior to the death of his bride Didyme but he apparently loved her deeply. Ever since her death Marcus has sunk in to a extreme state of depression and apathy and is barely alive even by Vampire standards. His state of mind seems to have been made worse by the fact that Aro had Chelsea force him to feel loyalty to the Volturi and it has resulted in him being locked in a permanent state of grief-related apathy. During the meeting to discuss the Cullen situation in New Moon he barely acknowledges the proceedings and hardly speaks, just sits staring off in an almost bored manner. Despite this he does become animate in the presence of people with strong emotional ties like Bella and Edward and defends them on several occasions during encounters with the Volturi possibly because their love reminds him of the love he once had with Didyme.

Marcus has the ability to recognize relationships. Stephenie Meyer described Marcus's powers as the following: "Marcus's gift is actually quite valuable in the hands of someone who knows how to use it. For example, imagine Marcus on the battle field. He sees the binding ties between the enemy the guard faces. He can tell who the leader is just by watching the way the others are tied to him or her. He can see how to destroy the resistance simply by picking off a few key people. He doesn't just see romantic relationships, but also ties of family and friends, loyalty and devotion. He can tell if any given person would die for another. Off the field of battle (as the Volturi rarely leave their home), Marcus's gift is valuable politically (for lack of a better word). It's an amazing gift in a diplomatic situation. Plus, when you're sitting on an empire, it’s nice to be able to see when someone's loyalty starts wavering. Or if anyone is getting too fond of anyone else. Can you see the potential now? Marcus didn't get where he is with some fluff skill."

When Marcus first encounters Bella and Edward, he is surprised by the intensity of their relationship. He shares this information mentally with Aro, without uttering a single word.

Marcus is portrayed by Chrisopher Heyerdahl in New Moon. 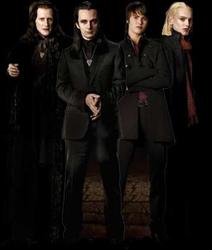 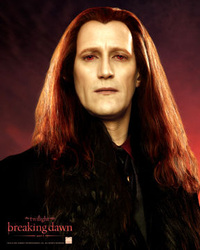