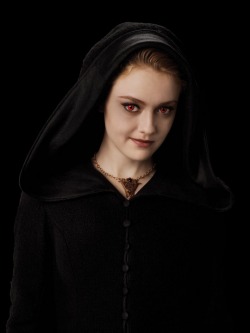 Jane is a vampire and the twin sister of Alec as well as a sadistic member of the Volturi Guard in the Twilight Saga. Jane and Alec are the Volturi's most offensive weapons, as they both possess abilities to completely take down an opponent, regardless of size. Jane has the ability to inflict a mental illusion of burning pain.

Personality and Traits
Jane is very dark and sadistic. She is easily angered when her powers get thwarted, and has a very deep and strong hatred for Bella after their first meeting in New Moon. She appears to worship Aro as she is very happy to be in his presence. She enjoys her powers, and the respect and fear that comes from her having them, and never wastes an opportunity to use them. Kate of the Denali Coven, an "extended family" of the Cullens' has a strong dislike for Jane, due to her sadism, and when they think it will come to battle, Kate corrects Bella, by saying that "Jane is mine". Kate wanted to fight Jane to give her a taste of her own medicine. But, despite her evil personality she seems to have a very loving relationship with her twin brother Alec, as seen in New Moon and Breaking Dawn. 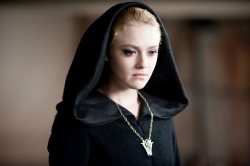 Physical Description
Jane is described as tiny with lank, pale brown hair trimmed semi short and pale skin to match it. She has a rather slim and androgynous figure. She has a face that is both angelic and fiercely childlike, and lovely when animated. She has wide eyes, full lips, and a childlike voice. And Bella describes her as having an exquisite face that would make a Botticelli angel look like a gargoyle. Her eyes are red when she has recently fed, but they turn black if she grows thirsty. In the movie she has blonde, longer hair and less full but close to it lips, her face also has more of a stronger jaw than round and childish as described, the same as the rest. 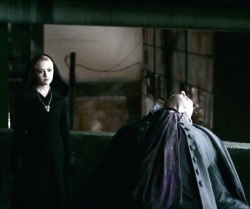 Abilities
Setting her special ability aside, Jane possesses common vampiric abilities too, such as granite-hard skin, razor sharp and strong teeth, sharp senses, speed, strength, agility, inhumane beauty, and immortality.
Illusionary Pain
Jane is known throughout the vampire world, along with her twin, Alec, for her horrifying gift. Jane has the ability to create an illusion of pain on her victims. When Jane inflicts torture on her victim, it physically does nothing to them, as Jane only has the ability to trick the mind into thinking there is pain. Jane can control how much pain she inflicts on her victim. The pain that Jane inflicts is described as being like "burning" inside of the victim. However, her power is useless on Bella, even when Bella is human. The reason for this is that Bella can block out a person's mental ability, as witnessed by Edward's inability to read her mind. Her ability is considered strong enough to incapacitate someone into a helpless target. But, unlike her twin brother Alec, who can use his powers on many people at the same time, she can only use her powers on the one object of her focus. Another difference is that her gift is really fast unlike Alec's that takes time to creep up, as seen in New Moon and Breaking Dawn. 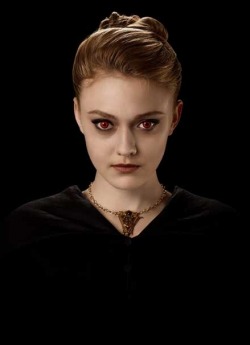 Early Life
The Volturi had their eyes on Jane and her brother Alec as potential vampires when they were still human, but were waiting until they were older to change them. When frightened humans started to burn the twins at the stake because of suspected witchcraft, Aro stepped in, slaughtering the whole village. Because of all she went through (several burns), Jane gained the power to voluntarily inflict a mental illusion of agonizing pain on others (burning illusion). Jane has since become one of the prize members of the Volturi Guard. It is unknown whether or not Jane's human name was 'Jane' as well, but the chances are high that it was. Her and Alec's surname remains unknown.

It doesn't say anywhere in the Twilight Saga what time period Alec and Jane lived in as humans, but considering that they still burned people at the stake then, it should have been around Middle Ages under the control of Holy Catholic Inquisition. (1200-1400 AD)

New Moon
In New Moon, Aro sends Jane and two other guards to go and bring Edward to their castle. Upon Jane's arrival, Bella realizes immediately that Jane is very dangerous despite her size (small at 5 ft), as Edward does exactly what she says without hesitation. Bella also notices her child-like beauty. After returning with Edward, Alice and Bella, Alec takes great delight in Jane bringing back more people than she set out for. When Aro realizes he cannot penetrate Bella's shield, he asks Jane to try. Edward immediately stands between Bella and Jane and takes Jane's torture. Once Jane finishes with Edward, she tries to inflict her pain on Bella, but is infuriated when it fails. She instantly takes a deep profound hatred for Bella, and is very displeased, angered, and offended when Aro compares her gift to Bella's ability to block mental powers. 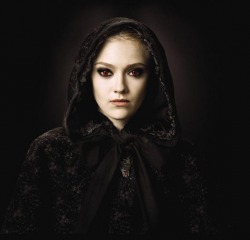 Eclipse
In Eclipse, Jane travels to Forks with Demetri and three other guards to deal with the newborn army that Victoria had created. She is rather shocked to find that the Cullens have dealt with the situation on their own, without one of them being injured or killed (but keeps her emotions hidden). Upon their arrival, Jane notices that there is one newborn left, Bree. Jane asks for her name, and when she doesn't reply, Jane inflicts her torture. Bree contorts on the floor in absolute agony. When Jane stops, Bree starts talking, and Jane decides to inflict her torture onto her another time, due to her taking time to answer questions. After several minutes of discussion, and another unsuccessful attempt to torture Bella with her power, Jane orders Felix to "deal with her" because she is bored and wanted to go home. Felix deals with Bree, and returns back to Volterra. 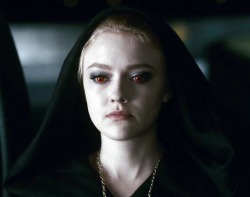 Breaking Dawn
During Breaking Dawn, Jane, accompanied by the entire Volturi Guard, make their way back to Forks, this time to destroy an immortal child. She is really annoyed to find that Aro has given Bella a wedding gift, a sparkling pendant. Later, it is discovered that Renesmee Cullen is in fact a vampire-human hybrid. As this confrontation takes place, Jane tries to create an illusion of pain on her enemies. As Bella is shielding them, Jane's gift has no effect on them whatsoever. She is infuriated and tries to spring but Alec stops her with a restraining hand. At the end, Jane departs with the rest of the Volturi Guard.

Etymology
Jane can mean "merciful" in Hebrew, an ironic name for a character who takes pleasure in torturing others. This name may be chosen as it rhymes with pain; also because she can appear harmless until she has her powers unleashed. And although the name 'Jane' is said to be a plain and simple name, Jane of the Volturi is most definitely not in any way, plain or simple. Jane is a sweet name for a girl, which she obviously is not.

Film Portrayal
On March 6, 2009, Summit Entertainment announced via email to the subscribers of TwilightTheMovie.com that Dakota Fanning will be playing the role of Jane in New Moon. Actress Lucy Hale reportedly also auditioned for the role of Jane. Dakota Fanning reprises her role as Jane in Eclipse.Although Jane is said to have "lank, pale brown hair trimmed short", she has long, blonde hair in the film portrayal.
'Twilight Reality is the quality of being true to life within the Twilight Saga' © All Rights Reserved 2008-2011