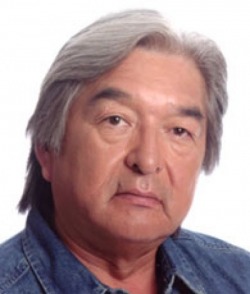 Graham Greene is a Canadian actor who was born on June 22, 1952 in Brantford, Ontario, Canada.

He plays the part of Harry Clearwater who dies from a heart attack in the 2009 film, New Moon.Greene is an Oneida, born in Ohsweken on the Six Nations Reserve in Ontario, the son of Lillian and John Greene, who was an ambulance driver and maintenance man. He lived in Hamilton, Ontario as a young adult. Greene's first brushes with the entertainment industry came when he was an audio technician for rock bands based in Newfoundland and Labrador going by the alias Mabes. He graduated from The Centre for Indigenous Theater's Native Theater School program in 1974, and began appearing in theater in Toronto and England.

Greene's TV debut was in an episode of The Great Detective in 1979 and his screen debut was in 1983 in Running Brave, and appeared in such films as Revolution and Powwow Highway, but it was his Academy Award nominated role as Kicking Bird (Lakota: Ziŋtká Nagwáka) in the 1990 film Dances with Wolves that brought him stardom. This role was followed by such films as Thunderheart, Benefit of the Doubt, and Maverick, and the television series Northern Exposure and The Red Green Show. Greene also acted along-side Bruce Willis and Samuel L. Jackson in the 1995 film Die Hard with a Vengeance, where he played Detective Joe-Rob Lambert. He hosted the reality crime documentary show Exhibit A: Secrets of Forensic Science. In 1992, he played the role of Ishi, the last Yahi, in the HBO drama The Last of His Tribe. In 1994, he began appearing as Mr. Crabby Tree in the children's series The Adventures of Dudley the Dragon for which he received the Gemini Award. In 1997, Greene suffered a major depressive episode, and had to be hospitalized after a police encounter. He survived the ordeal, and subsequently was featured as Arlen Bitterbuck, a Native American on death row in the Oscar-nominated The Green Mile (1999). He starred in the short-run television series Wolf Lake in 2001. In 2004, he accepted the Earle Grey Award for lifetime achievement at the Gemini Awards. In 2005, he re-emerged as the potential love interest of a pre-operative transsexual woman in Transamerica. He appeared as himself in a parody of the famous Lakota-brand pain reliever commercials, on CBC Television's Rick Mercer Report. In 2006, Greene was the presenter of the documentary series The War that Made America about the French and Indian War of the mid–18th century. In the same year, the Stratford Festival of Canada announced that Greene would be taking leading roles in their 2007 productions of The Merchant of Venice and Of Mice and Men. Greene provides the pre-recorded narration for the highly acclaimed outdoor drama, Tecumseh! in Chillicothe, Ohio, based upon the life of the famous Shawnee chief, Tecumseh. Greene also portrayed the famous Sioux leader Sitting Bull in a short Historica vignette. He guest starred in an episode of the TV series Numb3rs, as a First Nations chief. He also guest-starred on multiple occasions on The Red Green Show as Edgar "K.B." Montrose, an explosives enthusiast. In 2007, he appeared as Shylock in the Stratford Shakespeare Festival production of The Merchant of Venice. He appeared in The Twilight Saga: New Moon as Harry Clearwater, Charlie Swan's old friend.