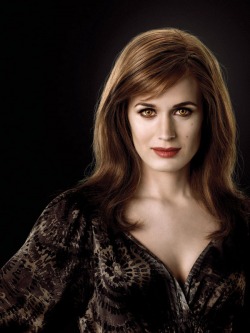 Esme Cullen (born Esme Anne Platt and later Esme Anne Evenson) is the wife of Carlisle and adoptive mother of Edward, Rosalie, Emmett, Alice, and Jasper. She enjoys restoring old houses and her physical age is 26. She has no special power, but has a strong ability to love passionately. Esme is described as being 5′6? with caramel-colored hair; she also has a heart-shaped face with dimples, and her figure is slender, but rounded and soft. Esme was born in the late 1800s, living in Columbus, Ohio, where she was treated at the age of 16 by Carlisle after breaking her leg when climbing a tree. She married Charles Evenson, but was abused by him. After finding out she was pregnant, she ran away and gave birth to a son, who subsequently died a few days later. Mournful of his death, Esme attempted to kill herself by jumping off of a cliff. Presumed dead, she was brought to a morgue. Carlisle, who remembered treating her years before, was able to sense her heartbeat and changed her into a vampire. Esme fell in love with and married Carlisle soon after. She loves her adoptive children as much as she did her own son, but still grieves that she cannot bear children. 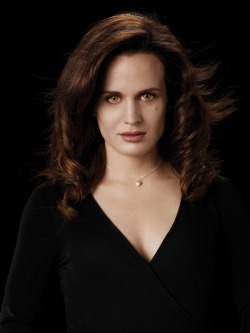 Esme is present throughout the entire Twilight series, revealing her past to Bella during the Cullens’ baseball game in Twilight. Esme treats Bella as her own daughter, comforting her after several traumatic events. In Breaking Dawn, it is revealed that Esme owns a South American island named “Isle Esme” that was purchased for her by Carlisle, where she allows Edward and Bella to spend their honeymoon.
'Twilight Reality is the quality of being true to life within the Twilight Saga' © All Rights Reserved 2008-2011