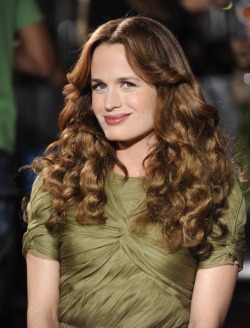 Elizabeth Ann Reaser (born on June 15, 1975) is the American actress who plays Esme Cullen in Twilight, New Moon, and the upcoming Eclipse.

Reaser was born in Bloomfield, Michigan and wanted to be an actor from childhood. As the middle child in a trio of sisters, she grew up in rural Milford, Michigan. Her mother (a homemaker), and her father (an attorney turned restaurateur turned substitute teacher) are divorced. Through high school, she worked several odd jobs, including being a caddy at a country club.

Reaser began college at Oakland University in Rochester Hills, Michigan, but after one year yearned to leave the midwest and expand her horizons. She applied (with her parents' blessing) to the Julliard School of Drama, and was accepted. From Julliard she was awarded a Bachelor's of Fine Arts (B.F.A.) in 1999. She struggled at first, but soon found adequate representation and a part on the daytime drama series, Guiding Light. Since then, she has become an accomplished film, television, and stage actor, landing numerous supporting and leading roles. Reaser appeared as a multi-episode patient named Ava (aka Rebecca) on Grey's Anatomy, and later returned for a few episodes as Alex Karev's mentally unstable girlfriend. She earned a Primetime Emmy Award nomination for Outstanding Guest Actress in a Drama Series for this role. She was also the lead character on the short-lived show The Ex List. In 2008, she played the role of Esme Cullen in the movie Twilight. She returned for the film's 2009 sequel, New Moon, and will reprise her role in 2010's Eclipse.

Reaser once appeared in a London stage production for only two audience members, and in preparation for her role on Saved she hung out in an emergency room, researching the behavior of medical staff. In October 2004, Interview magazine hailed her as one of the "14 To Be" emerging creative women. She earned the "Jury Award" at the Newport Beach Film Festival in 2006 for her work in the film Sweet Land, and in 2007 was nominated for an Independent Spirit Award as "Best Female Lead" for the same part.

Reaser is a vegetarian.
'Twilight Reality is the quality of being true to life within the Twilight Saga' © All Rights Reserved 2008-2011