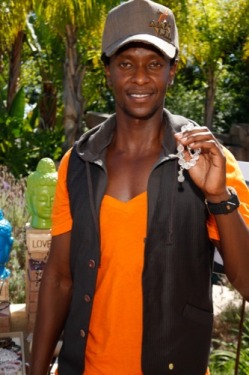 Edi Gathegi was born March 10, 1979 in Nairobi, Kenya. He is now an American film, stage and television actor. Gathegi is best known for his appearances as recurring character Dr. Jeffrey Cole in the television series House and as "Cheese" in the 2007 film Gone Baby Gone. He has recently played Laurent in the Twilight movie. He reprized his role in the New Moon film.

Though born in Nairobi, Kenya, Gathegi grew up in Albany, California. As an undeclared undergraduate at the University of California, Santa Barbara, he was more interested in playing basketball and was good at it, right until he injured his knee; This plunged him into a depression so he took up an acting class as an "easy course". That is where he discovered his love for acting. Afterward, he attended the Tisch School of the Arts at New York University for a graduate school acting program. Gathegi's career began in theater, and his stage credits include Two Trains Running at the Old Globe Theater, As You Like It, Twelfth Night, Othello, A Midsummer Night's Dream, and Cyrano de Bergerac, among others.

Career
Gathegi's first professional role was the Haitian Cabbie in the 2006 film Crank. Though he had originally auditioned for the role of Kaylo, the producers gave the role to Efren Ramirez and instead offered Gathegi an appearance as the Haitian Cabbie. He was dubious at first about performing a Haitian accent, but was coached by his Haitian friend. In 2007, after guest-starring on Lincoln Heights and Veronica Mars, Gathegi went on to star as Bodie in Death Sentence, Darudi in The Fifth Patient and Cheese in Gone Baby Gone. He later had a recurring role as Mormon intern Dr. Jeffrey Cole on the television medical drama House, and guest-starred on CSI: Miami, CSI: Crime Scene Investigation and Life on Mars in 2008 before being cast as Laurent in Twilight. When Gathegi first auditioned for the 2008 film, adapted from the same-titled first book in Stephenie Meyer's Twilight series, he had not heard of the series and was not aware that his character was a vampire. He now has read the whole series and calls himself a hardcore fan. Gathegi appeared as Deputy Martin in 2009's My Bloody Valentine 3D. He plans to star in a spring Broadway production of Joe Turner's Come and Gone and also returned to his role as Laurent in Twilight sequel New Moon.

Twilight
Gathegi tried out for the movie on the recommendation of a casting director he knew; at the time he had no idea it was a vampire story. Although he found the script a little unusual, he had a good time meeting Catherine Hardwicke. He says "Her energy and enthusiasm won me over. In Hollywood, you don’t have a lot of awesome audition experiences, but she and I just clicked."
To get into the role of a vampire without fangs he says "For me, it was an exercise in stillness. The less I did, the creepier I’d be. The more vampire I’d be."
He has read all four novels, but Twilight is his favorite.
'Twilight Reality is the quality of being true to life within the Twilight Saga' © All Rights Reserved 2008-2011