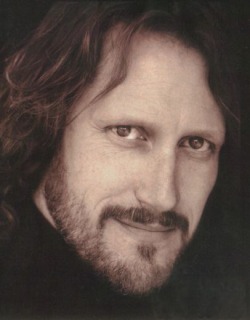 Christopher Heyerdahl is a Canadian actor who played Marcus in the film New Moon, the adaptation of Stephenie Meyer's second book of the Twilight Saga. His character is described as apathetic and appears constantly bored by any situation.

A seasoned actor in his generation, he is most known for his role as Todd the Wraith in Stargate Atlantis and as a series regular as the powerful Druitt on the Sifi channel series "Sanctuary."

Christopher was born in the mountains of British Columbia, Canada which made his first generation as a Canadian. His mother is Scottish, and father is Norwegian. He is also a gifted hockey player, and was once asked to play for the Ottawa Senators. Christopher happens to be half Norwegian and the late Thor Heyerdahl was his father's cousin. He speaks three languages, English, French, and Norwegian.

Miscellaneous
He loves his DVDs, his motorcycle, scuba diving, snowboarding, and skiing. Heyerdahl has been a professional actor on both stage, screen and radio and has worked all over the world - Asia, Africa, Europe and North America. Heyerdahl has worked a number of years at the Shakespearean Stratford Festival in Ontario. He is/was a Member of Pigeons International, an internationally acclaimed physical theater troupe.
He's been in two kingdoms: "Kingdom Hospital" and "India: Kingdom of the Tiger". He's worked with director Eric Canuel 4 times. Has played at least 2 Nazis, Ernst Kaltenbrunner in 'Nuremberg' and Marius Franken in 'Varian's War'. Franken is ficticious, Kaltenbrunner, tragically, was not. He is also a gifted hockey player, and was once asked to play for the Ottawa Senators. Christopher wanted to be a psychologist before deciding to pursue acting.
'Twilight Reality is the quality of being true to life within the Twilight Saga' © All Rights Reserved 2008-2011