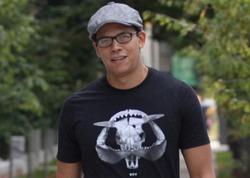 Chaske Spencer is the actor will who portray the character of Sam Uley in the New Moon film. He will be replacing Solomon Trimble, who was not credited to be Sam, but claimed his lines in Twilight.

Spencer was born on March 9th, 1975 of the Lakota Sioux tribe, and raised on Indian reservations in Montana and Idaho. He is committed to making a difference with all people in the area of reducing poverty and creating sustainable communities. He is a spokesperson for United Global Shift.

Besides New Moon, he can be seen guest starring on some TV shows and he performed in New York productions. His TV credits include: Skins, Into The West, Dream Keeper, Spin City, Fashionably Loud, and Strangers With Candy.

In December 2009, it was reported by several online sites that Chaske was in rehab before filming New Moon. He was supposedly in a Native American rehab facility, where he confided in a rehab patient, that no one could know that he was in there, "because it could ruin my career" he was quoted as saying.

The source continues: He talked about how he'd get all 'jittery' after using. He said that he'd get 'tweaked out' and stay locked in his room. Then, Chaske said he'd come out and run around all over New York, partying at clubs and jumping from woman to woman. He admitted that he was a womanizer who felt he could get any girl he wanted."

Chaske responded publicly to these rumors in an online message to fans on his website.

Here is the statement: To all the wonderful, incredibly loyal fans:

For those of you that read that I was in rehab, I wanted to make sure you heard the truth from me directly. Yes it is true, that I was in rehab, however it was over 19 months ago, long before NEW MOON was even on my radar. It was a pivotal time in my life where I was lucky enough to have supportive friends and family to help me get healthy. I am grateful that I have been clean and sober now for 19 months and cannot imagine my life if I had continued using drugs and alcohol. Almost everything else that was written about this is blatantly false and we are exploring our legal options. That was my past, and I am thankful that I had the opportunity to create a new future for myself. I encourage anyone who is in a similar place to seek support from their friends and family and know that without them, I would not have had the chance to be where I am now.

I want to thank all of you for the support you have shown, and continue to show. I appreciate each and every one of you.

Chaske can next be seen in The Twilight Saga: Eclipse where he will reprise his role as werewolf alpha Sam Uley.
'Twilight Reality is the quality of being true to life within the Twilight Saga' © All Rights Reserved 2008-2011