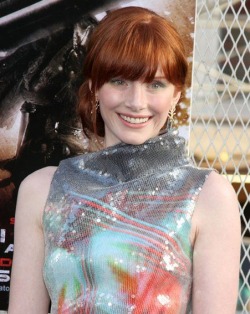 Bryce Dallas Howard (born on March 2, 1981, in Los Angeles, California) is an actress who portrays Victoria in the upcoming film adaptation of Eclipse. She replaces Rachelle Lefevre, who played Victoria in Twilight and New Moon.

Personal Life
Howard became a devoted vegan after Joaquin Phoenix showed her Earthlings (2007), a documentary about animal cruelty. Since seeing it, she has apparently consumed no animal products, not even milk or eggs. Her other activities outside of the acting profession include playing basketball and writing. On June 17, 2006, in Connecticut, she married her long-term boyfriend, actor Seth Gabel, whom she met at New York University and had dated for five years. On February 16, 2007, they became parents of their first child, Theodore Norman Howard Gabel.

Howard is close friends with Natalie Portman and Jake Gyllenhaal.

Career
Howard attended the prestigious Steppenwolf School and Stagedoor Manor Performing Arts Camp at Catskills together with her friend Natalie Portman. She applied to drama school as Bryce Dallas, dropping her last name to eschew special treatment because of association with her renowned father. From 1999-2003, she studied at the Stella Adler Conservatory and at the New York University Tisch School of Arts, and graduated with a BFA degree in Drama in 2003. At that time, she performed in Broadway productions of classical plays. Young Howard appeared in three of her father's films as an extra, including her appearance as a child together with her mother in Apollo 13 (1995).

She made her feature-film debut as Heather, a supporting role in Book of Love (2004). Director M. Night Shyamalan was impressed by her performance in a Broadway play and cast her without an audition as the female lead in his thrillers The Village (2004) and Lady in the Water (2006). Howard replaced Nicole Kidman in Manderlay (2005). She starred as Rosalind in As You Like It (2006), a reprise of her stage role that made such an impression on Shyamalan. She is also billed as Gwen Stacy in Spider-Man 3 (2007).