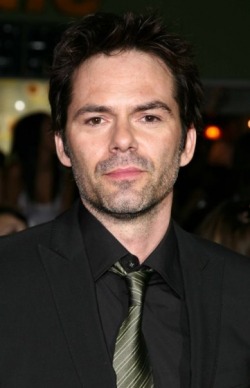 Billy Burke was born and raised in Bellingham, Washington, USA. He began singing at age nine, and joined a band at age fifteen. He continued to work with bands and study/performing drama at Western Washington University. He performed in Seattle at the Annex Theater, New City Festival, and the A.H.A. Theater. He made his feature film debut in the independent film Daredreamer (1990) and then moved to Los Angeles, CA, USA, to pursue a career in singing and acting. He has since appeared in such films as Jane Austen's Mafia! (1998), Marshal Law (1996) (TV) and "Roman Paris". He has made guest appearances on such television shows as "Party of Five" (1994) and "Star Trek: Deep Space Nine" (1993).

Cut from the cloth of Hollywood's most enduring leading men, Billy Burke graces the American screen with a resounding presence and a seemingly effortless ability to inhabit the roles he plays. Though admittedly untrained in the craft, he has built a body of work that is looked upon by the film and television community as esteemed and undeniable.

It was as a musician not an actor that Burke first moved to Los Angeles. A demo deal with a major record label that "didn't quite pan out", left him to explore the only other thing he "knew he was good at". With two independent films shot in his native Seattle under his belt, he began auditioning and very soon working as an actor. After a string of mostly "bad guy with facial hair" TV guest appearances, he landed his first studio picture role in the Zucker brothers' genre spoof Jane Austen's Mafia! (1998). Capitalizing on his deadpan comedic sensibilities, he then won the title role in Dill Scallion (1999), the cult classic "mockumentary" about the rise and fall of a slightly touched country music singer. Co-starring in "Dill", was then fledgling writer/director Peter Berg. It was Berg who brought Billy back to television to play "Dr. Abe Matthews" in the acclaimed ABC drama "Wonderland" (2000). Although its life on the air was short-lived, "Wonderland" (2000) won the hearts of critics and fans, alike, and was recently re-released in its entirety on DirecTV.

Paramount's Along Came a Spider (2001) marked Billy's first revisit to studio films. He then returned yet again to television for the second season of Fox's mega hit series "24" (2001). His disturbing portrayal of abusive father and husband "Gary Matheson" still resonates as a fan favorite.

In 2004, Billy teamed up with John Travolta and Joaquin Phoenix in the firefighter drama Ladder 49 (2004). It was here that the studios once again began to recognize his on-screen magnetism. So, after another steady stream of notable television performances, he was cast alongside Anthony Hopkins and Ryan Gosling in New Line's hit thriller Fracture (2007/I), directed by "NYPD Blue" (1993) creator Gregory Hoblit. This multi-layered turn as a flawed cop snared by his own aberrations caught the eye of Academy Award winning director Robert Benton. Benton swiftly invited Billy to join the cast of his and Lakeshore Entertainment's Feast of Love (2007), which included Morgan Freeman and Greg Kinnear. As fate would have it, neither Gregory Hoblit nor Lakeshore had seen enough of Burke's dry wit and unshakable persona, so when it came time to find a match for Diane Lane in Untraceable (2008), he got the call to play the rock solid "Detective Eric Box".

Since arriving in Hollywood in the early 90s, Billy Burke has never stopped working. There are countless credits that come in between the afore-mentioned that of course, also serve as a testament to his gift and longevity. However, it was a chance viewing of Dill Scallion (1999) that struck an indelible head turn for director Catherine Hardwicke. The impression Billy's performance left, lasted until they met in 2007 while Hardwicke and Summit Entertainment were looking for someone to play "Charlie Swan" in their film adaptations of the bestselling book series The "Twilight" Saga. After a brief meeting and read-through of a few scenes, Billy and Catherine agreed... it was "meant to be". Summit followed suit and welcomed him into the franchise. Millions of fans around the world have concurred with the choice and the overwhelming response to his theatrical work has given him solace in the fact that he never got that record deal.
'Twilight Reality is the quality of being true to life within the Twilight Saga' © All Rights Reserved 2008-2011