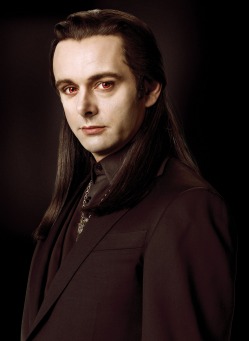 Aro is one of three vampires who lead the Volturi. He is widely accepted as the overall leader of the Volturi, and possesses the gift of tactile telepathy, the supernatural talent to ascertain all the thoughts and memories a person has ever had with a single touch. Physical description Aro is described as having almost translucent skin, and it is repeatedly compared to onion skin throughout the series. When Bella first meets Aro, she feels compelled to touch his skin to see if it is smooth and cold like Edward's or powdery like chalk. His hair is very long and jet black. When he moves, it appears as though he's floating. His eyes are a milky red color that has a tendency to unsettle people. This red is also due to his diet on human blood.

Personality
Aro normally carries himself in a cheery disposition and has shown to be polite to the point of being at complete ease with even the most objectionable of situations. However, beneath this facade of optimistic giddiness, he is power-hungry and highly manipulative. He finds Bella Swan's immunity to mental powers, including Jane's "pain" power, intriguing. He invites her to be in the Volturi Guard twice after she becomes a vampire, but both times she refuses. This upsets and surprises Aro, but does not infuriate him.
He holds power over everything and is willing to go to any length to secure his status, even if it means killing those he loves, as exemplified when he murdered his sister Didyme in order to keep Marcus in the Volturi.
He has shown himself to be an avid collector of talented vampires that he finds desirable to recruit for the Volturi guard especially his personal guard, Renata, and Jane. He deeply believes that the Volturi is necessary for the survival of the vampire species, with its bylaws that hold secrecy of the existence of vampires to the utmost importance. Due to humanity's continuously advancing technological prowess to the point where there are already weapons in existence that can kill vampires, he speculates that it is only a matter of time before they create more devastating constructs that may be able to wipe out the entirety of vampire-kind on Earth.

As the apparent leader of the Volturi, Aro is exceptionally talented. Being vampiric, Aro is blessed with superhuman strength and speed, vastly enhanced senses and immortality. Aro also possesses the supernatural ability of tactile telepathy, an ability allowing him to read minds; his ability is far more powerful than Edward Cullen's because he is capable of hearing every thought a person has ever had. However, his powers are limited since he requires physical contact and cannot read minds from a distance.

Etymology
Aro is Finnish for ‘hard, relatively infertile ground’ or ‘swamp'. A place name and as a surname throughout Finland. In many cases the surname was adopted during the name conversion movement in the 19th and early 20th centuries, especially in southern Finland.

Approximately a decade after having been transformed into a vampire, Aro also changed his sister Didyme,  with hope that she would possess an ability akin to his. However, she was blessed with an ability not as useful to him; the power to make people happy. Aro's colleague Marcus fell in love with her, and she with him. However, Marcus and Didyme eventually became discontent being involved with Aro's rising organization, the Volturi. In order to prevent their leaving, Aro killed Didyme: Marcus was too integral to his plans to lose. Aro then had Chelsea  use her ability to ensure Marcus remained loyal to the Volturi.
By 500 AD, the Volturi had usurped control of the vampiric world from the Romanian Coven. Aro ruled the Volturi, along with Marcus and Caius,  although he generally acted as its spokesperson. The Volturi, under the three ancients' leadership, set down the laws of the vampire world and severely punished those who did not adhere to them.
Carlisle Cullen came to live with the Volturi for some time, and became close friends with Aro. However, Aro was alarmed at Carlisle's preference to "vegetarianism", and believed that this would only weaken him over time. Carlisle eventually left to find other vampires like himself.

Edward's request
At one point, Edward Cullen,  one of Carlisle's adopted children, comes to the Volturi. Edward was deeply depressed because he believed his love, Bella Swan, had committed suicide, and as such was himself suicidal. Aro is interested in Edward’s ability to read minds from a distance, and tries to recruit him to join the Volturi instead, saying it would be a waste to kill him. He later meets Bella, after she and Alice prevent Edward's suicide attempt. He is both surprised and intrigued in Bella's ability to block Edward's powers, and even more intrigued when she resists his and Jane's powers. He allows Edward to take Bella back to Forks only after Alice shows him in a vision that Bella will eventually be transformed into a vampire.

Newborn crisis of Seattle
When an army of newborns begin to run rampant in Seattle, Aro sends Jane, Felix, Demetri,  and two unknown vampires to 'deal with the newborns'. In fact, Edward notes that by delaying his company, Aro may want to let the newborns decrease the Cullens' numbers.

Dealing with the Cullens
In New Moon, Alice allows Aro to touch her, therefore reading her mind, so he can see the vision of the future she has had of Bella as a vampire. It is described by Edward that Aro searches through not only the vision of Bella, but much more, delving deeply into Alice's mind so he ends up "knowing her better than she knows herself." He is described as seeming "enthralled" and "delighted" by her talent, and Edward mentions in Breaking Dawn that there's nothing Aro wants more than Alice's power.
Sometime after Bella is transformed, she receives a necklace from Aro, supposedly from the English crown jewels. Alice had mailed the Volturi an announcement for Bella and Edward's wedding, and Aro in return sends Bella the necklace as a wedding gift. It is described as being extremely large and ostentatious.
Sometime later, Irina,  a vampire from the Denali Coven, comes to Volterra to inform the Volturi that the Cullens had created an Immortal Child. In response to this breach of their laws, the Volturi gathered the entire guard together (including the wives) and set out for Forks to destroy the Cullens. Aro, meanwhile, intends to use the situation to try and force Edward and Alice into joining the Volturi.
When the Volturi arrive, Aro and the others are shocked to discover that the Cullens have assembled a vampiric army to oppose them, furthering Aro's belief that they'd created an immortal child. Bella also describes Aro "scanning the crowd" as though searching for a certain face - most likely Alice's - and Bella feels suddenly glad Alice isn't with them after all. The Volturi only stop launching an immediate attack when they notice the line of werewolves  behind the undead army. Aro, in his usual fashion, acts as speaker for the Volturi. After reading Edward's mind and learning about Renesmee, the so-called immortal child, Aro is both astounded and delighted to discover that she is actually half human. He is also amused at the idea of having the werewolves, whom he believed were the Cullens' pets, as guard dogs. Unfortunately, the angry snarls from the wolves inform him that it would never happen.
Despite the attempts to keep the encounter from turning violent, Aro declared that Renesmee had to be killed because they weren't sure if she would become a threat. But unknown to everyone else except Edward, his attitude changed when Bella's power was revealed. Realizing Bella's mental shield rendered all the Volturi's powers useless, Aro knew they were at a huge disadvantage and started looking for a way to get out of a fight. Soon after, Alice and Jasper  show up with another vampire half-breed named Nahuel. The knowledge that there are other half-breeds in the world gave Aro the excuse he needed to leave, and he retreats with the rest of the Volturi. 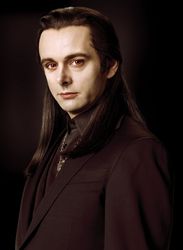 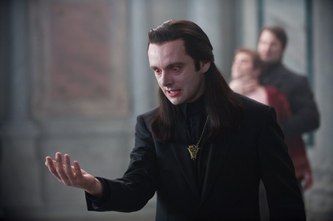 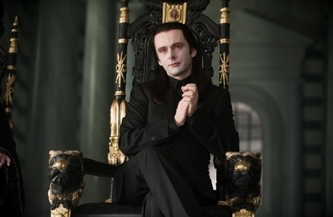 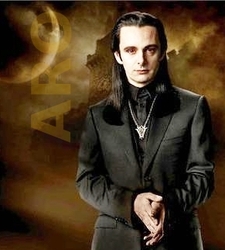