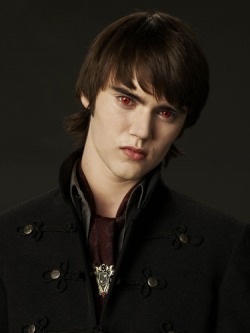 Alec is a member of the Volturi Guard and is one of the highest ranked guards. He has a twin sister named Jane.  Jane and Alec are the Volturi's most offensive weapons, as they both withhold abilities to completely take down an opponent, regardless of size. Alec has the ability to cut off a person's senses completely.

Physical description
Alec is described as looking a lot like his sister, having pale skin and blood-red eyes, though his lips that aren't as full as his sister Jane's, and he has darker brown hair. But, he is just as small as she is in height, as he was changed when he was very young, Alec is described as angelic and beautiful. He has purple-like bruises under his eyes, which change with his level of thirst.
Personality Little is known about Alec, though it seems that he is more lively and less sadistic than his twin sister, Jane. This is because in New Moon, instead of being apathetic like most of the Volturi Guard, he takes delight in teasing Jane for bringing back two and a "half" vampires back to the castle of the Volturi. Alec is often confused for being the nice twin, but Stephenie explains this to the contrary. Stephenie Meyer (author) explains Alec as the more calculating type, the one who will attack without warning. 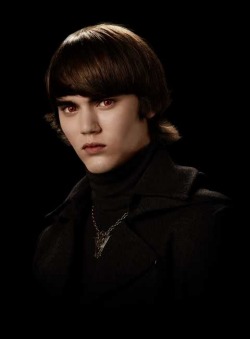 Special talents
Alec has an extremely powerful gift which is equally powerful as his twin Jane's. He has the ability to cut off a person's senses. He can make them blind, deaf, and numb to any feeling if he wishes to. When he uses his gift, it appears in the form of a shimmering hazy mist. Unlike Jane's power, Alec can cut off a multiple number of people's senses while Jane can only inflict her power on only one person in her focus. Also, Jane's power works immediately while Alec's takes time to creep up. When he attempted to use it on the Cullens and the vampires they had gathered as witnesses, Sam Uley's  pack and Jacob Black's pack, the 'mist' slowly crawled towards the group. Upon hitting Bella's 'shield', it went around it, making Bella's shield look like a bubble of protection (which it was). Alec did not retract his 'mist' for the entire confrontation, constantly looking and probing for holes or weak spots in Bella's shield.

Alec and Jane are believed to be the most powerful, or one of the most powerful vampires in the world, due to their amazing offensive gifts. It is currently unknown if Jane and Alec are skilled at fighting, without the use of their gifts. However, they have been alive for many centuries, and been with the Volturi for the same amount of time, it is sure that they would have picked up some good skills throughout their lifetime. Other than Alec's special talent, he has common vampiric abilities, such as extreme speed, sharp senses, granite-hard skin, agility and strength.

When in battle. Jane and Alec are kept in the sideline, under the protection of bodyguards. Here, from a distance, they can stun their opponents, with their powers. Often, when Aro, Marcus and Caius are in discussion of whether someone is guilty or not guilty, Alec will blind, deafen or numb them, so they can be easily dealt with when the decision has been made. This is how it happened in Breaking Dawn. When Aro, Marcus and Caius are talking, Jane and Alec tried to use their powers to stun the Cullens and their witnesses, but this failed, due to Bella's shield.

Etymology
Alec is a diminutive of Alexander, which means 'defending men'. Perhaps irony on how Alec is one of the Volturi's most offensive weapon's. 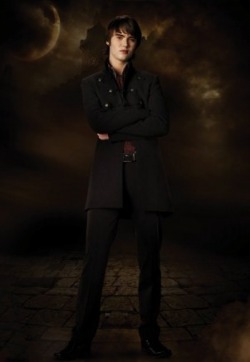 Early life
Aro had his eye on the twins for many years, and decided to wait until they were older to change them. This changed when Aro was forced to slaughter the whole village because the humans believed them to be using witchcraft, and tried to burn them at the stake. Aro was now forced to change them while they were still young. They are now the most valued members of the guard, due to them being extremely powerful. It is said, that they are probably a pair of the most, if not the most powerful vampires in the world, and have the ability to take down vampires twice their size. It doesn't say anywhere in the Twilight Saga what time period Alec and Jane lived in as humans, but considering that they still burned people at the stake then, and also considering that Jane met Carlisle for the very first time in Eclipse, it was probably from somewhere around close to the 1700s.

New Moon
New Moon is the first time Alec is featured. Jane is sent out into the castle to bring Edward to the rest of the guard, and Alec takes delight in teasing Jane for bringing back Alice and Bella too. Alec watched as Jane tests her powers on Edward and Bella and does not use his powers. Once Edward, Alice and Bella are permitted to leave, they must wait until midnight to go. Alec went to tell them when they could leave.

In the movie adaptation. Alec keeps hold of Bella whilst Aro decides what to do. When Aro makes his decision, Alec turns Bella around to face Demetri and Felix. It is then when Edward jumps in to protect her. 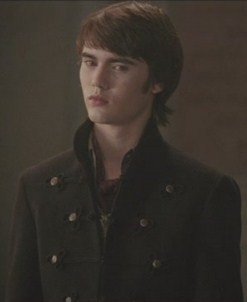 Eclipse
Alec does not appear in Eclipse. His twin, Jane, is sent to clean up the newborn army that Victoria created. It is said that only five members of the Volturi came: Jane, Demetri, Felix, and two other vampires. But it is possible that he will appear in the Eclipse movie.

Breaking Dawn
Alec appears towards the end of Breaking Dawn, and plays a larger role. He, alongside his twin, Jane, accompany the rest of The Volturi guard to Forks to deal with the presumed immortal child. Jane and Alec were supposed to use their powers to give The Volturi an advantage. After Jane's powers were unsuccessful due to Bella's shield, Alec tried to use his powers. However, he too was unsuccessful at penetrating Bella's shield, leaving him and his sister with hate and confusion. But, despite this, he doesn't retract his "mist" and continued to look for holes and weak spots in Bella's shield, but was also unsuccessful.

After Renesmee Cullen was proved to be a half human, half vampire child, Alec retreats to Volterra along with the rest of the Volturi.
'Twilight Reality is the quality of being true to life within the Twilight Saga' © All Rights Reserved 2008-2011